His silence would arrive sharp and abrupt, interrupting a joke, or what seemed to be a good day. It would sulk around for days, giving only piercing glares of hate-filled rage as the demons in his head whispered and taunted, and I struggled to remember what I had done wrong. Then, the silence would end:

He says: “I wish I never got married. I could’ve slept with a lot of women.”

(Does he not remember who he’s speaking to: me, his wife?)

He promises: “I’m sorry. I’ll do whatever it takes.”

(Thank God there’s no guilt-gifts anymore, humiliating me with

He says: “Boys, your mother would rather be at work than home with you.”

promises. Yet what home would we have without a roof over our heads? )

He accuses: “Why did he talk to you? You’re sleeping with him, aren’t you!”

(He’s my boss. We have to speak to each other. Don’t worry. I’ll find

He screams: “You pay more attention to the kids than you do to me!”

(They’re my children, and I don’t get to see them much anymore.)

He pleads: “Let’s have another baby.”

He declares: “All women cheat. Just be sure you don’t bring anyone home tonight.”

(This is what it feels like to be ‘hit by a ton of bricks’. I can’t breathe.)

He sneers: “You are cold hearted. You can’t give me another chance?”

(Five years of chances. I can’t remember the second one, blown like

He says: “You make me sound like a monster. You’re lucky I don’t hit you like the rest of the men in my family do.”

(I think he’s comparing himself to the wrong spectrum of men.)

He attacks: “If you leave me, you’ll be alone. You’ll never find someone as good as me!”

(Being ‘alone’ does not sound bad.) 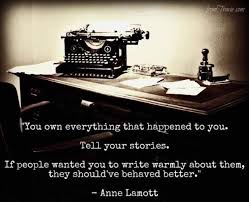