I have learned some things. Magically. Overnight.

The snippets of information I have found regarding okara are just that: snippets. Add to that, most people posting are more professional than I and have handy dandy soy milk makers, which makes a big difference not clearly explained. Someone somewhere said making soy milk by hand produces raw okara, whereas the automatic maker gives you cooked okara.  All recipes call for cooked okara,  as our bodies can’t easily digest the enzymes in raw. No one explained this further, so I took it to mean you can’t eat it as is.

Yes,  but no. What it means is you have to cook it before you cook it.

Found a site today that says to boil, steam, or toast, along with some pretty interesting recipe ideas. Now we’re getting somewhere! The previous site I’d visited had instructions on drying, or dehydrating,  okara. But it gave no reasons why I’d want to do this or what I would do with it. New site did! It stores much better,  can be used as an egg substitute for vegans,  and a protein powder for smoothies.

That’s what I’m going to do!  I am writing this while steaming the first batch in the rice cooker, while waiting for yesterday’s fresh-made tofu to finish cooking in the pressure cooker. 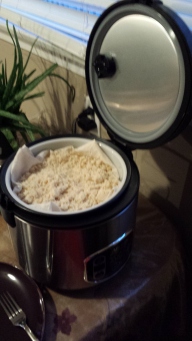 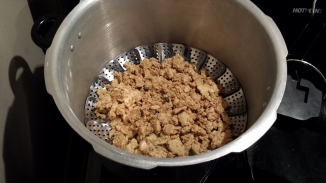 I’m still in a somewhat taco mood so I’m making lemon tofu ‘fish’ tacos. I don’t know what I did,  but the tofu I made came out super firm. Super. I don’t know how else to describe it, but it’s actually really perfect. Chicken nugget kinda. Not spongy and fragile. Perfect for tacos! (which I’ve never tried before). What shocked me more was that the tofu gets steamed. First time that’s happened, too!

The recipe is in the book ‘Everything Vegetarian Pressure Cooker’. If you decide to get this book,  follow it loosely. I’ve learned to regard it as a rough guideline on what things go together and how to actually use the pressure cooker (which is the slow cooker’s opposite).  It was not edited properly and there’s some pretty big mistakes I discovered the hard way. Like,  you really only use 2tbs of Cayenne if you’re seasoning food for 100, not 4. One recipe called for 2 cups of water…….. But the instructions only mentioned using one cup.

Think it’s my favorite so far! The boys each ate two, but true to their booger fashion, won’t admit that they liked it. Dudes,  you ate two without being told.  Actually,  you asked for seconds.

Went shopping for a dehydrator. Again. Could only find the exact same solitary one. It doesn’t have a fruit roll-up pan, which is a huge necessity. Need it for the okara, which is almost flour-like, and also for my tea leaves. After lots of back and forths that began Monday night, I ended up ordering from Amazon. Won’t come in till next week. Which stinks. Okara has a very short shelf-life, so I threw it in the freezer. My other plan of the day was to make brownies with it, but came home to find that booger #1 drank all the soymilk, which is needed in the recipe.

Defrosted it, and made those brownies! I didn’t follow the instructions. Didn’t have soy milk, so used regular milk. Didn’t have whole wheat flour, used regular flour. The batter had no flavor, so I added salt and more sugar, and also a good dose of cinnamon. I held out no hopes. First time I’ve ever baked something without eggs (which is awesome). My reasons for being vegan-ish are strange. Milk and eggs are natural products of animals that don’t involve harming them, so I don’t view it as a problem. Yes, the conditions they may be kept in can be questionable, but I think much has been done to improve that. I don’t like milk, so I prefer not to drink it. Which doesn’t mean I don’t. The thought of eating eggs has increasingly gotten grosser. Probably something psychological. Haven’t a clue. Don’t care. I use to bake with eggs with no problem. Now, I cringe whenever I have to add it. Ate tons of raw cookie dough in my life as well. Now, I can’t. There’s eggs in there. The boogers love their scrambled eggs, which I rarely did for them (bad mom, I know). And then one day I realized, #1 is old enough  to cook them himself, so I taught him, and no longer have to see or smell it. Works great!

Anyway, this was my first vegan baking. It does not taste like brownies.

It tastes more like cake. It’s actually pretty amazing. You wouldn’t know there’s neither butter nor eggs, and that the bulk of it is a soy-based something. After eating two pieces (I have to make sure it’s safe and good enough for the boogers, who most likely will eat it all while I’m at work tomorrow before claiming they didn’t like it), I’ve noted adjustments for next time (probably tomorrow). It’s very dense and so a little dry. More milk, maybe applesauce? More salt, sugar, and cinnamon. I’d recommend adding some chocolate chunks, something to make it gooey. Otherwise, I’m pleasantly shocked!