Yay! One project done! (Though anything relating to a garden is never done, I’m learning!) Somewhere last week, while searching for more ways to use my garden, I came across this quote by Theodore Roosevelt:

“Do what you can, with what you have, with where you are.”

Of course, I can’t find where I found it.  It fits, and at a time when I need it most. I haven’t liked where I’ve been in a long time, and despite the issues with the current location, I decided, Screw it. No more excuses. I can do what I want, learn what I want, now. Regardless if I am renting, if nothing can be permanent. And I can stay well within the boundaries of a lease agreement, and not cause any damage.

Last time: The Before: 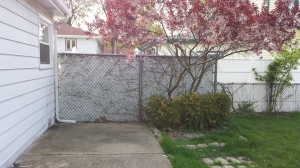 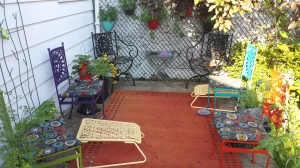 (Those footrests were originally white, by the way. White didn’t match. I spray painted them a soft yellow.) 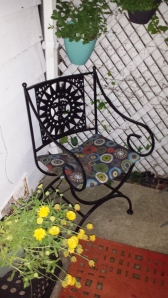 (The remaining chairs are teal, paprika red, and purple)

Look at the brussel sprouts by the green chair!

But now for the rest: the garden….all in containers. 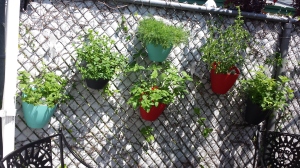 My tea garden, hanging on the back fence, has grown really well. Actually, way better than I ever anticipated.  I had serious doubts as to any sort of success, honestly. I hadn’t a clue how they’d grow, and the whole process has been pretty magical. Yesterday, I had to transplant my chamomile out of its hanging basket (top teal one, which had been the smallest, puniest thing) as it had outgrown it (pretty noticeable in the picture). So badly, in fact, that there wasn’t a whole lot of dirt left in there. The roots had grown through the weedcloth and through all the filler packing peanuts as well! Ooops.

There’s apple mint, mint (also really puny and- now that I know better- pretty sickly when I bought it. Not sickly now!), varigated lemon balm, stevia (where Truvia comes from) and bee balm (used to make Oswego tea, which was used as a tea replacement during the Boston Tea Party! Can’t wait till these flower).

With all the cuttings, I had to start looking further than just my own books for how to use them. I found this awesome blog, The Nerdy Farm Wife. If you are growing herbs and want to know all the many things you can do with them, go check out her site. Not only herbs, but edible flowers. Did you know roses are edible? Or that you can make wine from dandelions? Or jelly from sunflower petals? Or your own cough drops?!

I am now waiting pretty impatiently for my roses to start blooming! And just bought myself a sunflower 🙂 (to which Booger #2 replied that he thought I had too many plants. What!?) 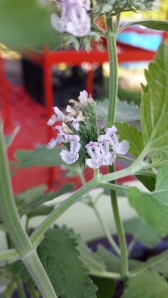 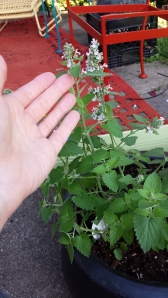 Catnip. Did you know it’s a good digesive aid for people as a tea, and also acts like chamomile, calming and helping you sleep. The flowers are amazing. Super tiny! But on close up, they look like miniature orchids. Sideways, they look like birds with their tails spread out. Flowers go in the tea as well! 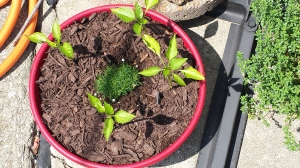 Green peppers and the only surviving scottish moss! 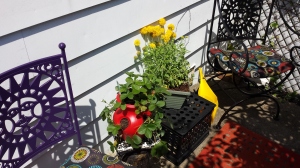 Strawberries. And a pretty yellow flower whose name I can’t think of…..Hoped it would help attract all the butterflies I see everywhere.

Black beans! I am so excited about these! Today, I found a purple flower on one.

Parsley, dill, cilantro. And lemon thyme on the floor. The square planter in the back has cauliflower and carrots.

Catnip in the cauldron, tomato, and a thornless raspberry bush in the pink! And yarrow. Coincidentally, this is where I wanted the yarrow to go. I bought it for the small red flowers on tall stalks (I don’t like little flowers), then by the time I got home, I began thinking I’d read about it in one of the herb books. Looked it up, and yes, it’s an herb. Leaves are good for bug bites! Further, it’s known as a nursing plant, and placing it near diseased and poor doing plants somehow improves those plants.

Well, this is my sick ward. The only plants that have issues are the ones I bought from actual nurseries. Mostly, I bought from Walmart and home improvement stores.  Catnip came with bugs. I snipped off every leaf that showed signs and thought I’d killed the plants. They looked really sad and horrible. Transplanted them into the cauldron, not expecting much. Today, you can’t see any dirt! They’ve exploded.

I naively bought the tomato way too early, Mother’s Day, and the temperature had not stabilized. It’s been having issues. Yesterday, I pruned out a lot of the branches (which had turned yellow with a drastic temperature drop), hoping to also give it some better air circulation so I’d actually get some fruit before they rot. It’s very sad!

Raspberry was great when I bought it, then quickly began to have problems. Leaves brown and die, fruits doesn’t last long. Learning that the newcomer was a nursing plant helped solidify my decision to place it right here, where it would be needed most!

Lavendar. Could not have a garden without it. It’s not as popular now as it used to be. Medieval times, it was used a lot. I love the flavor. It is strong, and different, but oh so yummy. Got a cupcake with lavendar frosting once. OH. YUM. My mom, not a fan. But starbucks puts it in their earl grey latte (which is where my taste for it began, oddly).

I propped a lot of the planters on these plastic crates my mom had lying around in her garage. It added height, contrast, color, and, because of the grating, I stuck some solar lights in the corners! (You can spot one beside the lavendar).

Which leads to the garden at dark. There are lightning bugs aplenty in my new ‘hood. Because Chicago has been spraying for West Nile Virus to kill the mosquitoes, lightning bugs have dissappeared. I googled to find out why they were no longer as prevelant as when I was younger, and that’s the logical cause quite a few people had also posted on. Pretty sure city officials won’t care.

But I do. And over here, they’re helping out by giving me some ambience at night (but lightning bugs are like fairies: They don’t like their pictures taken).

Solar bird lights from Ikea, as seen from inside the house:

And from the garden itself: 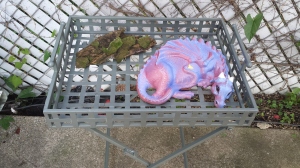 Finally, no place of mine is complete without a dragon.

Enjoy your summer, stop making excuses, and get started on those projects!

3 thoughts on “How My Garden’s Grown”