I came home from my work’s Christmas party last night with this……anxiety attack. Something was wrong. I went through the events of the day, trying to figure out what I’d done. I couldn’t find anything, but I knew, something was wrong. ‘Knew’. I went to the living room at midnight to maybe watch some TV, maybe calm down some. I turned on the light and looked immediately to the bird cage. But he was covered up for the night. #2 did so before he went to bed, so if something was wrong with Sampson, he’d have noticed. I had the urge to check on him, but waking him up has diastrous consequences, so I left him alone, watched TV.

I went to bed, and talked myself through it: Everything is fine. Nothing happened, I didn’t make a fool of myself at the party, I won that bingo game fairly, I didn’t forget anything, this is an illogical feeling.

I had plans of going to my Writers’ Group meeting this morning. It was our Holiday party too. Had to get up early, wake the boys, buy some food to bring, get myself some tea, and make the hour drive down. I was going to make a day of it: drag the monsters with me, force them to entertain themselves for a couple hours in the library until my meeting ended, then we’d go out for lunch, get their hair cut, do some shopping.

Getting out of bed was so odd. I was tired, and shaky, and felt off. I debated for an hour, then decided not to go after all. Then changed my mind again. It’s just me being poopy. Again. Get out of bed. I asked #2 to feed him while I brushed my teeth, and then within five minutes, he came running to the bathroom and just stood there for abit before finally speaking. Sampson’s dead.

I heard the words, but couldn’t make sense of it. Dead? Why would he say ‘dead’? That’s preposterous. Maybe he means something else. Someone else.

Then it hit me, and I ran out, and it was true. And the feeling of wrongness settled away.

He was further along than just second-hand when I adopted him ten years ago. Estimated by his previous person to be at least in his mid 40’s back then, he was untrained, unhandlable, and fairly vicious when out of the cage. But he called me ‘baby’ when he saw me, he loved to sing and whistle, and he loved to ring this obnoxiously loud bell. He’d yell out the boys names in the other’s aggravated tone, would yell Mooooom! (also in the boys’ aggravated tone), would laugh hysterically when someone else did, swore like a college bachelor, and went into a long string of one-sided phone commentary whenever it rang or if he saw me merely touch one. He adored my three year old niece, who was the only one ever allowed to reach in his cage and play with his toys without retribution or threat. I’ve tried to guess how many people had him before me based on things he’d say, the changes in his tone of voice, the different things that upset or cheered him, but never succeeded.

This poor boy. I can’t imagine his life was all sunshine, and he’s managed through the hard times our family has faced. I hope he knows how much we loved him, how greatly we’re missing him right now.

No matter how many times it happens, the death of a pet has not gotten any easier. 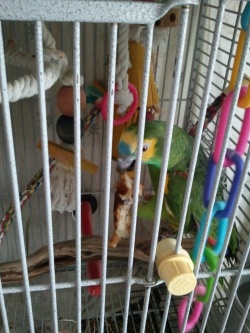