I woke up this morning to the weirdest sounds. Muffled and light, soft and broken and released in little batches.

Sure enough, Phoebus, my little red god of light and singing, has found his voice and is in practice mode. I detect a bit of cardinal in his song, too. (that cardinal likes my yard and is always nearby, belting his songs out. I love cardinals, so it’s good). I had put out a large sock feeder for the finches last weekend, hoping their noise would also entice Phoebus a little (canaries are actually finches. Who knew?). He’s young and I’m not sure if they need to be taught. We play some YouTube videos here and there for him.

It seems I’m not allowed to post video. Hmm. I swear I have in the past…. Anyway, meet Phoebus! Five months old now. I found him at a bird fair back in April. A red and black bird. Come on, I couldn’t pass him over. I wanted to name him Nightmare, but the boys vetoed me. The actual Nightmare does not sing and would not have been amused with my sense of humor. It only struck me as more hysterical. Oh well.

It’s been a hot week, but it rained much of yesterday, thankfully. I glanced out my patio door and found that my delphiniums had begun to bloom! I first saw these last year, I think. (It was not a gardening year, though. It was a painting year. Still haven’t finished.)

I saw them again early this year, but could not bring myself to pay $25 per gallon plant. Geeze, with as many as I want, that’s like a mortgage payment in flowers. But I found some hidden in a new nursery, $10 a gallon. Score! I didn’t know why I was so drawn to them at first. The blue-purple of the flowers were just amazing and striking. I looked them up and discovered they are my birth month’s flower. Huh. How about that? 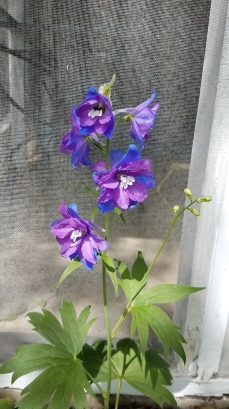 There’s two more waiting to be planted…but there was a forest of ferns to clear out! It’s taken a whole lot longer than I originally planned. My back has decided to do some funky-scary spasming where I go completely numb and partially paralyzed to my toes. Yea, this year has not started out very well, and six months out, hasn’t yet improved. But we’re working on it. Dr just wants me drugged without trying to figure out the whys.

Anyway, it suddenly hit me that I’m a mother of boys. And while this is in the realm of things I wouldn’t have asked them to do, I realized I had to. Accepting that you’re no longer physically able to do something you could have done easily last year is a really difficult thing to come to terms with. Anyway, they’re teenagers. Physical labor and outdoor chores are good for them. They need some muscle and character development.

They got those three large patches of ferns cleared in two days!

I’m a mother of boys. That was a pat on the back moment.

So the humming bird garden got started. The hummingbirds aren’t acknowledging my effort and continue to prefer the feeder. Oh well.